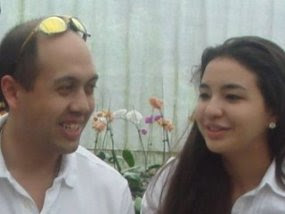 After several months living under the captivity of her husband i.e. Crown Prince Fakhry of Kelantan Malaysia, Manohara Odelia Pinot was finally allowed to return to Jakarta, this morning (photo: courtesy of Detik).

Detik reported that the 17 years old beautiful model was fetched by her mother Daisy Fajarina and sister Dewi Sri Asri at Hotel Royal Plaza in Singapore, and took her back to Jakarta.
Meanwhile, the spokesman of our Foreign Affairs Department i.e Tengku Faizasyah was quoted as saying that his office has sent a diplomatic note to the Malaysian government regarding Manohara’s case. He added that our Ambassador has met with people from the Sultanate of Kelantan who promised to let Manohara meet her family. He also added that our Embassy helped arranged Manohara’s departure from Singapore, which also involved the local Police.

The release of Manohara gives some valuable lessons for her family, for other Indonesian citizens and government and also for Malaysia, especially the Sultanate of Kelantan.
For her family, especially her mother, this is a lesson for allowing a very young teenager (16 years old) marries a much older foreign man whom neither her daughter nor she knew well. For other Indonesians, we should not be easily tempted to live & work abroad without clear legal status. And for our government, to provide better advocate to those who want to travel, live and work abroad.
Whilst for Malaysia, whose head of state is chosen from amongst the Sultans every 5 years, its people & central government should be very careful because as Crown Price of Kelantan, Fakhry would be the future Sultan of Kelantan and has a chance to be a head of state one day. If that happens, I am sure that it is not only our people and government who would not forget about his behaviors, but also people and government from other countries as well.
Posted by Unknown at 8:34 PM

but she was kidnapped and did not marry of her own free will and with her mother's permission, right?

Hi I have a check already, yes he is a prince of Sultan Kelantan. But then not the crown prince, coz the crown prince is his brother Tengku Faris. He is the 3rd son of Sultan Kelantan. Means that he won't be a sultan. Sultan has 4 children - The Crown Prince Tengku Faris, 2nd son Tengku Faiz (nor farid, sorry for mistakenly spell the name), 3rd is Tengku Fekhry n the last daughter is Tengku Amalin. However, Tengku Fekhr is still NOT A CROWN PRINCE.. TQ..

P/S: Sorry for wrong info at 1st, buat i have a check n here is the link if u wana have a look http://en.wikipedia.org/wiki/Sultan_Ismail_Petra_of_Kelantan

@Rob:
Aug 08 Mano(16) married - based on our Marriage Law she is eligible, but must get her mom's permission (under 21).
According to news her mom was present at the wedding.
Dec.08 she ran away to Jakarta.
Early 09 the Prince persuaded her, mom & sis to join him on minor Haj pilgrimage (Umroh) to Mecca.
But on the return flight she was separated from her mom & sis (kidnapped?).

@Anne Ai Ling:
Thank you very much for the correction; web site information; and your very clear comments.
I am very glad that Prince Fahri
is a Crown Prince, therefore no need to worry about the 'gloomy' future that I mentioned.

PS: your blog is in my blog roll

A game to support Manohara and Ambalat

So after the marriage, she is still under her mom responsibility? I guess her social life is not suitable to be at the palace... :)