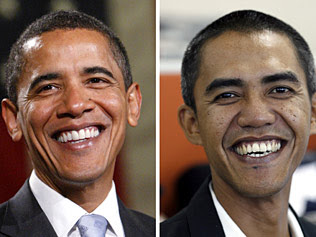 Last night hundreds of millions of people around the world focused their attention on the TV live report of inauguration of the new President of the United States of America Barack Obama.

In Indonesia, Obama is very popular because he has spent 4 years of his childhood living in Jakarta with his American mom, Indonesian step father and a sister. His popularity is so high here that the mass media continuously gave reports about him. Some has even sought and found men who looked like Obama. The most similar one being Ilham Anas, photographer of HAI teen magazine, who appeared in last night’s TransTV show Bukan Empat Mata hosted by Tukul Arwana. Ilham told viewers that his friends at the magazine have distributed his photograph in mailing lists, soon after his photo appeared in Singapore, Australia, and the Philippines. The audience who attended the show looks happy to know and see Ilham Anas who looked similar to Obama. According to Tempo, due to similarity with Obama, Ilham has been reported by international press such as AFP, Reuters, The Daily Express, Fox News, etc. A Filipino Pharmaceutical company has bind him with a one year contract to pose as a model for their commercials. In one TV commercial he appeared with look alike President Arroyo. Ilham is popular there that a Filipino website Pinoy Chronicles called him 'Pinoy Obama'.

In conclusion, I felt very happy that we have Ilham Anas who has been able to make people, in Indonesia & abroad, laugh to see that his face is similar to Obama. I hope that the 'real' Obama would also be able to bring happiness to people around the world, especially in Indonesia.

that is an uncanny likeness!

Interesting article! He does favor President Obama. Does he have his smarts? LOL Thanks for sharing your blog with me.

@Description:
Thank you for your visit and comment.
I doubt that he is as smart as Obama.